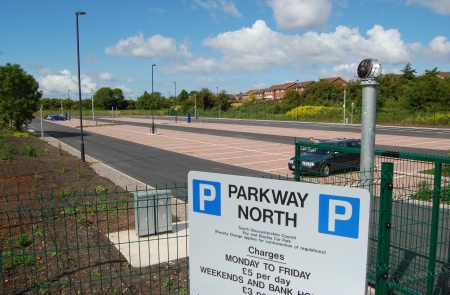 South Gloucestershire commuters can ‘dial and park’ for a special discount price at the new park & ride facility off Hunts Ground Road in Stoke Gifford (close to Bristol Parkway Station).

During September, all commuters who use their mobile phone to pay for parking will be charged just £2 per day, plus normal text charges – a saving of £3 on the normal daily rate.

The park and ride is also on the route of the proposed North Fringe to Hengrove rapid transit network, which the council hopes to gain funding for from the Department for Transport later this year. If the bid for funding is successful, it would provide links to Cribbs Causeway, Aztec West, UWE and Emersons Green, and to Bristol city centre and on to Hengrove.

The CCTV-equipped facility has 200 parking spaces. Charges are normally £5 per day during the week and £3 per day over the weekend, with payment possible by both mobile phone and on site.

Related story: A Freedom of Information request by BBC Bristol has revealed that just 139 drivers used the Stoke Gifford park & ride facility in the first three months of its operation.